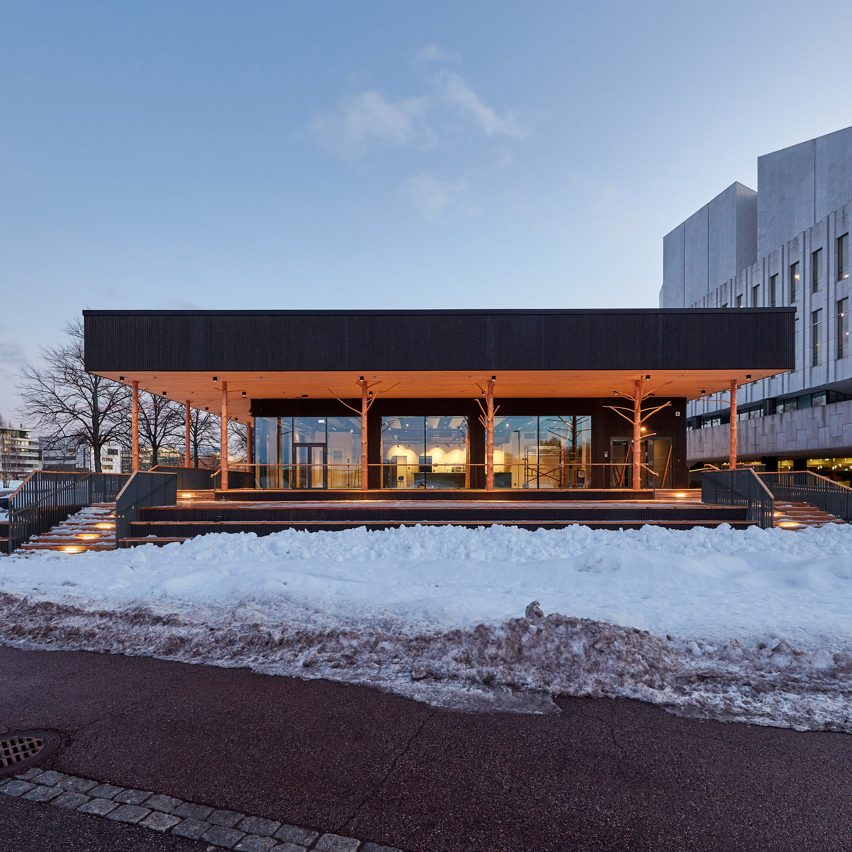 The temporary structure was developed by the City of Helsinki as a meanwhile space during a three-year renovation of the neighbouring Finlandia Hall, designed by legendary Finnish architect Alvar Aalto in 1962.

With an expected lifespan of 50 years, Little Finlandia‘s wooden modules will be transported elsewhere and re-assembled for the building to be used as a school or day-care centre once the work on Finlandia Hall completes in late 2024.

The building was designed to evoke a sense of the country itself.

“When I started designing Little Finlandia I started thinking what comes to my mind from Finlandia,” Torvinen told Dezeen. “In my mind, the forest was the strongest connection to Finnishness.”

Scots pines, plentiful in Finland, were selected to evoke the paintings of Akseli Gallen-Kallela, whose works are often considered to be closely associated with the Scandinavian country’s national identity.

The load-bearing trees were individually selected from a forest in Loviisa about 90 kilometres outside Helsinki by Torvinen, professor Pekka Heikkinen of Aalto University and architect Elli Wendelin during a two-day expedition through waist-height snow.

They were felled without damaging their branches and pressure-washed to remove the bark, with minimal further processing.

Those with the most branches were used in Little Finlandia’s lobby and colonnade, while those with fewer offshoots were used in the events halls to avoid causing obstructions.

To counter the irregularity of the branches, the shape of the 2,200-square-metre building is a simple rectangle.

A 130-metre wooden terrace borders the entire glass-walled building, which opened in March, with a cafe looking out over Töölönlahti bay to the north.

Little Finlandia, or Pikku-Finlandia in Finnish, has space to hold a meeting of up to 1,100 people or a dinner for 800, with adaptable spaces that can be used for anything from government seminars to concerts and club nights. 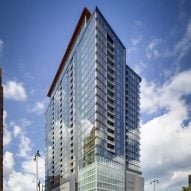 Its future dismantling has been incorporated into the design, with joints left visible and the possibility of adding partition walls or adapting the building’s footprint into an L-shape upon reassembly.

“Simplicity was an aesthetic choice to highlight even more the organic shapes of the whole trees,” explained Torvinen. “At the same time, it was structural and a practical choice in terms of disassembly and rebuildability.”

Using whole trees as pillars has a smaller carbon impact than engineered mass timber products such as glulam and cross-laminated timber because they require less energy to produce, Torvinen claimed, adding that reuse is also easier because other substances and materials are not present.

“I see no reason why this couldn’t be used in other buildings,” he said. “I would be happy to see more buildings utilizing nature’s own engineering and whole trees as structure. There is still much more potential than what we use now.”

The City of Helsinki has an ambition to reduce the climate impact of construction, promoting building with timber and the circular economy.

Torvinen developed the final design for the project under the working title Finlandia Forest in collaboration with fellow students Wendelin and Havu Järvelä while at Aalto University, with implementation support from Heikkinen as well as Helsinki studios Arkkitehdit NRT Oy and Arkitekturum.

“Although this type of construction was new for the workgroup, everything went surprisingly well,” said Heikkinen. “There is an ever-increasing need for temporary buildings, and for longer lifespans, too. The things we learnt from Little Finlandia can be applied to the design of new sites.”

The photography is by Mikael Linden unless otherwise stated.

The post Little Finlandia in Helsinki is a modular conference venue held up by pine trees appeared first on Dezeen.