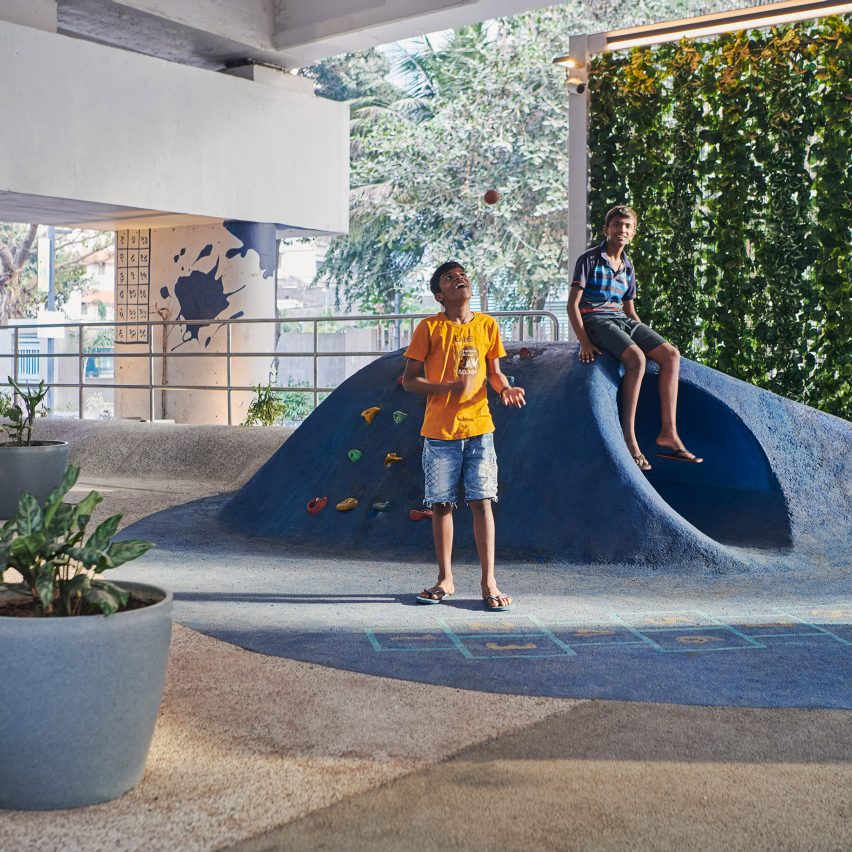 One Green Mile is a community landscape in Mumbai, India, which Dutch studio MVRDV and local practice StudioPOD have created from disused space beneath a concrete flyover.

The site, described by MVRDV as an “overbearing element of concrete infrastructure”, is part of a network of roads that extends 11 kilometres across Mumbai.

Its transformation was carried out by MVRDV and StudioPOD to provide the local community with improved public amenities and green space while demonstrating the potential of similar neglected and overlooked sites in the city.

“Perhaps one day we will see the end of noisy, unpleasant highways carving up our cities, but for now they are still unfortunately a necessary evil – one you can see in Mumbai more than most cities,” said MVRDV partner Stefan de Koning.

“One Green Mile asks the question: what if we expected highways to give something back to the places they cut through? A flyover can provide some shade in a hot city, and creates a small area of land that can’t be developed with tall buildings. It’s not such a crazy idea to make that into a public space.”

tcStudioPOD’s role involved developing the program for the project before MVRDV created its visual identity, which is dominated by the colour blue.

The landscape is conceived as a series of “public rooms” with different functions, ranging from a lounge with shaded seating to an outdoor gym, a performance space and a reading area.

These zones are unified by their graphic blue furnishings, which include slides, climbing frames, chairs and tables. 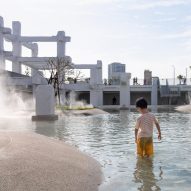 Extensive greenery also links the different areas, found across screens, planters and an archway. This is hoped to encourage biodiversity, cool the site and dampen noise from the flyover.

As part of the One Green Mile project, MVRDV and StudioPOD have enhanced the site’s accessibility by introducing paving, cycle paths and zebra crossings, as well as ample lighting to ensure safety at night.

The project is complete with water storage and filtering facilities, which allow monsoon rainwater to be collected for irrigating plants at the site.

According to MVRDV, there is an extension planned for the project, which will see a total of three kilometres of land beneath the wider road network transformed into public space.

Founded by Winy Maas, Jacob van Rijs and Nathalie de Vries in 1991, MVRDV is an internationally-renowned architecture studio based in Rotterdam.

Other recent landscape projects by the studio include the Tainan Spring pool built within the remnants of a shopping centre in Taiwan and the Rotterdam Rooftop Walk that crosses the rooflines of two buildings in the studio’s hometown.

The photography is by Suleiman Merchant.