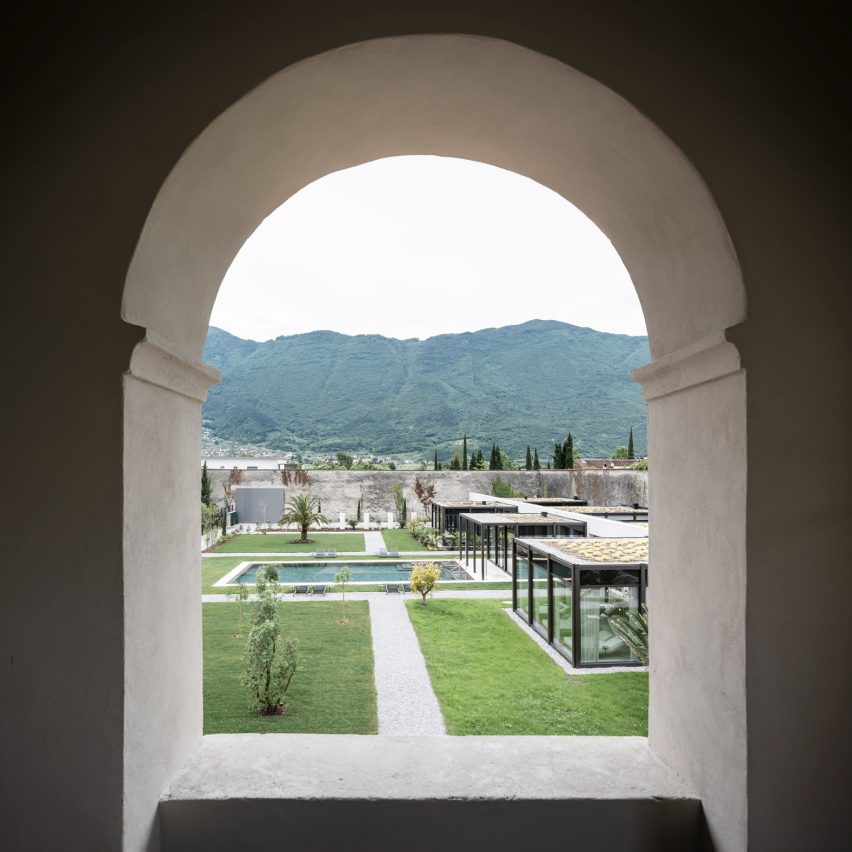 Network of Architecture has turned a former monastery in Italy into the Monastero Arx Vivendi hotel by conserving and refreshing the interiors, and inserting a series of glazed spa rooms into its gardens.

Italian studio Network of Architecture (NOA) worked closely with the Trento Office of Cultural Heritage to transform half of the 17th-century complex in Arco, near Lake Garda, into the Monastero Arx Vivendi hotel. A separate church and cloister on the site remain occupied by nuns.

Comprised of common areas and 40 guest rooms alongside a newly-constructed wellness area, the retrofit sought to retain and build on as many of the original features as possible, including a seven-metre high wall that surrounds the entire complex.

“The majesty and rigour of the architecture, the long corridors, the vaulted ceilings, all of these features combine to give these spaces a real olde-worlde feel,” said project architect Francesco Padovan.

“Every construction choice, every material and detail has been studied to draw on the majesty of the pre-existing context.”

On the ground floor of the monastery are the common areas, including a reception, breakfast room, bar and kitchen, which sit beneath original rib-vault ceilings.

These areas have been restored and covered with a rippled antique-effect plaster, with new concrete floors built atop the old.

Stone, wrought iron and wooden fittings in the reception area, breakfast room and bar aim to echo both the colours and textures of the original building, creating a feeling of “pleasant austerity” and illuminated by minimal hanging light fittings.

Above, the 40 guest rooms are spread across the first floor around a grand central corridor, and the loft, where the large wooden roof beams have been left exposed and topped by a large skylight.

Each bedroom occupies what would have been two monastery cells, with a larger suite occupying the former washroom.

The antique-effect plaster finish has also been used in these spaces, complemented by pale wood floors, black iron furniture and earth-toned fabrics, and the original doors have been restored on their external-facing sides.

The Salas per Aquam wellness space is a new development consisting of seven glass and metal volumes built along a stone-wall “spine”.

Relaxation lounges, treatment areas and saunas occupy these rooms, with a central room opening onto an outdoor pool.

“Our aim was to create a dialogue more with the surrounding agricultural landscape than with the monastery,” explained Padovan.

“To do this we used very simple elements with strong structural clarity. The light metal framework, organised in pillars and beams, is inspired by the characteristic lemon houses of rural Lake Garda.”

The interiors of these new spaces are intended to create a sense of calm and relaxation, with bleached oak panels, pew-like benches, suspended beds and intricate milled panels on the walls and ceilings.

NOA recently completed another hospitality project in Italy, extending a hotel in South Tyrol with a series of gabled “treehouse” suites raised on stilts.

The photography is by Alex Filz.