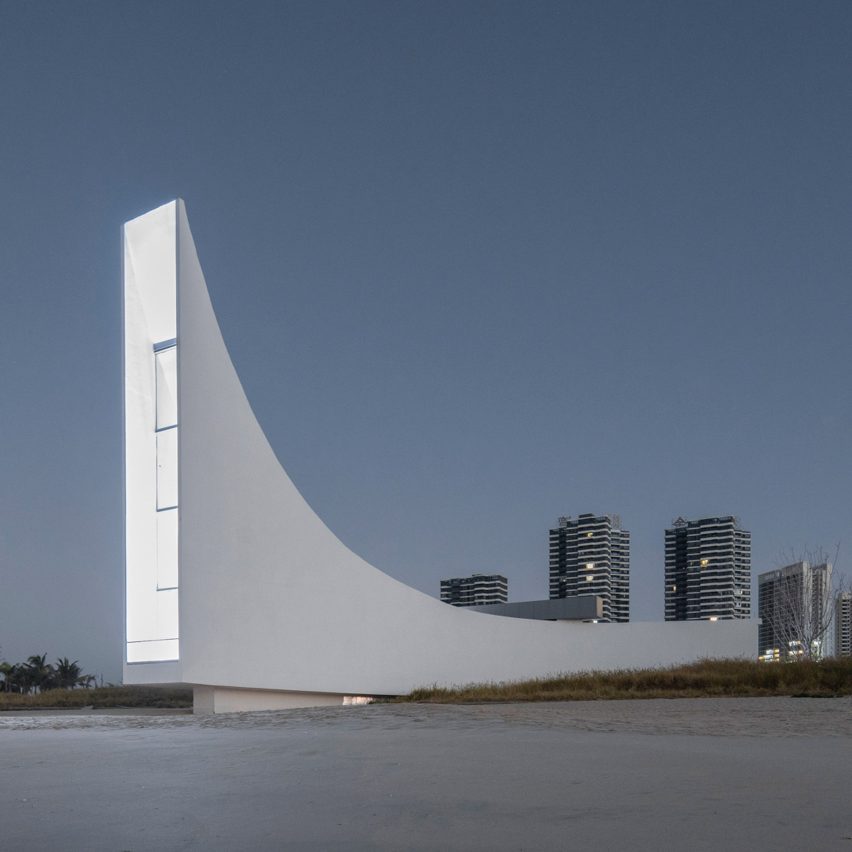 Architecture studio O-office Architects has placed a sweeping, bright white chapel on a beachfront in China to serve as a “spiritual and figurative anchor” on the coastline.

Located in the city of Shanwei, a historic fishing settlement in southern China, the chapel takes the shape of a swooping structure that is oriented toward the sea.

The Seaside Chapel of Jinting Bay is triangular in plan, and comprises a wide linear axis at the entrance and a tall vertical axis facing the beachfront.

“The inspiration behind this seaside chapel is the coastline of the Jinting Bay – part of the South China Sea, and the Matsu Culture of this region,” O-office Architects told Dezeen. “The tension between the newly constructed, generic skyscrapers blocks that sprawled along the coastline and the sceneries of natural serenity.”

“We tried to examine and create this new ‘totem of the sea’ with a parallel perspective of history as we receive the commission to design a place of ceremonial worship, emphasising and terminating the central axis of this emerging city along the seaside.”

The entrance to the chapel, which faces inland, spreads horizontally across the site and obscures the view toward the beach. It is accessed via a 36-metre-long paved walkway that bisects a shallow pond.

The curved exterior walls that flank the chapel guide visitors from the wide, linear entrance toward the narrowing and vertically extending rear. 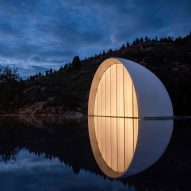 The ground level houses the chapel while the basement contains storage, waiting areas, bathrooms and staff areas. A staircase that links the ground and basement level also provides access to a roof terrace.

“Inside are abstract forms of a traditional screen, courtyard and hall, spread horizontally against the central axis of the new city, allowing people in the middle of urban jungle a place of spiritual repository,” said the O-office Architects.

The studio used concrete across the exterior to ensure the structure was resistant to strong winds and coastal erosion.

“Concrete also adds the intrinsic ‘sculptural’ touch to the building itself – so that this chapel not only stands there as an object in the field but a sculpture paying homage to the sea,” it explained.

“Originally we chose the colour white for this chapel’s symbolic meaning as a totem of Matsu, for the purity of the Matsu goddess”, the team continued, referring to a popular Taoist and Chinese Buddhist sea goddess.

Floor-to-ceiling glazed walls line the entrance, providing the chapel with transparency that frames the worship area and seafront.

The ceiling rises from the widest point to join the tallest axis. Glass spans the height of the rear wall allowing light to flood into space, similarly framing the beachfront, sky and sun.

“This new ‘totem’ creates a spiritual and figurative anchor for the rapid-emerging coastal city, to re-establish a connection node in-between the city and the rural, land and sea.”

O-office Architects was established in 2007 by He Jianxiang and Jiang Ying in Guangzhou. The firm works on projects from urban design and architecture to exhibition and furniture design.

Also in China, Syn Architects topped a chapel with a shallow pool and an illuminated half-moon that aims to encourage visitors to explore the surrounding natural landscape. Open Architecture built The Chapel of Sound, a monolithic concrete events space that was designed to resemble a piece of the natural landscape.

The photography is by Wu Siming.