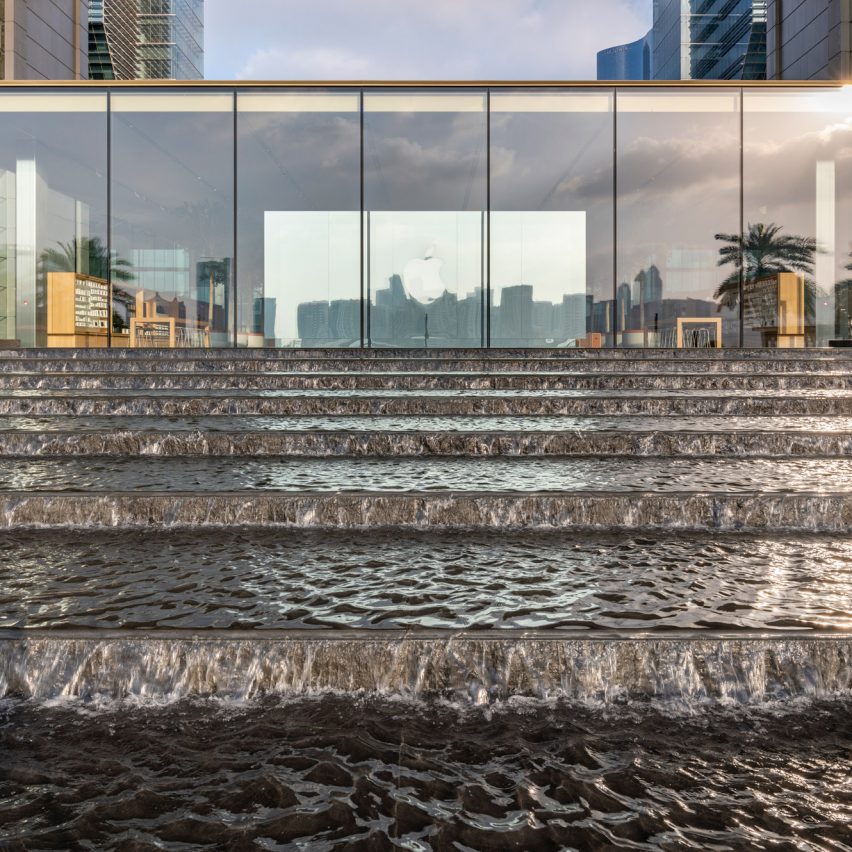 Foster + Partners has unveiled the Al Maryah Island Apple Store in Abu Dhabi, which is surrounded on all four sides by a stepped waterfall.

Built alongside the Galleria Al Maryah Island Mall, the store sits on a raised podium on the waterfront overlooking the city of Abu Dhabi in the United Arab Emirates.

“The design of Apple Al Maryah Island is all about the view of the extraordinary skyline of Abu Dhabi and creating an experiential route for visitors, as they walk through surrounded by the calming water and mirrors,” said Stefan Behling, head of studio at Foster + Partners.

“It seeks to draw the vitality of the waterfront promenade through the site and into the store, blurring the boundaries between inside and outside, and generating an exhilarating and inspirational Apple store.”

Foster + Partners enclosed the store, which is entirely sheltered by the Abu Dhabi Securities Exchange building, with glazed walls on all sides.

It stands on a stepped pyramid formed of black granite stone that has water flowing down it.

“Elevated above the promenade, it marks a distinctive new presence as a glistening pearl atop a cascading black water feature,” said Foster+ Partners.

The store also creates a direct connection between the mall and the water’s edge, activating the promenade and the public plaza.

The store is accessed from two bridges that extend across the stepped water feature from the waterfront promenade.

It is directly connected to the mall by a covered walkway made from milled glass that is entered through a stainless-steel doorway. 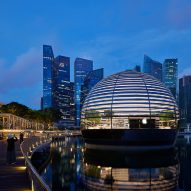 The 22-metre-long corridor was topped with a stretched mirror foil ceiling to create “a kaleidoscopic effect” within the space.

Inside, the single-storey store has a 5.75-metre-high ceiling that is covered with stretched gold fabric.

The space has stone a floor made from the same black granite as the surrounding water feature. The display tables are arranged around Ficus trees.

In the United Arab Emirates, Foster + Partners previously created a store for Apple surrounded by carbon-fibre in Dubai. Other recent Apple Stores designed by Foster + Partners include a spherical glass store in Singapore and a shop in the historic Tower Theatre in Los Angeles.

The photography is by Nigel Young.