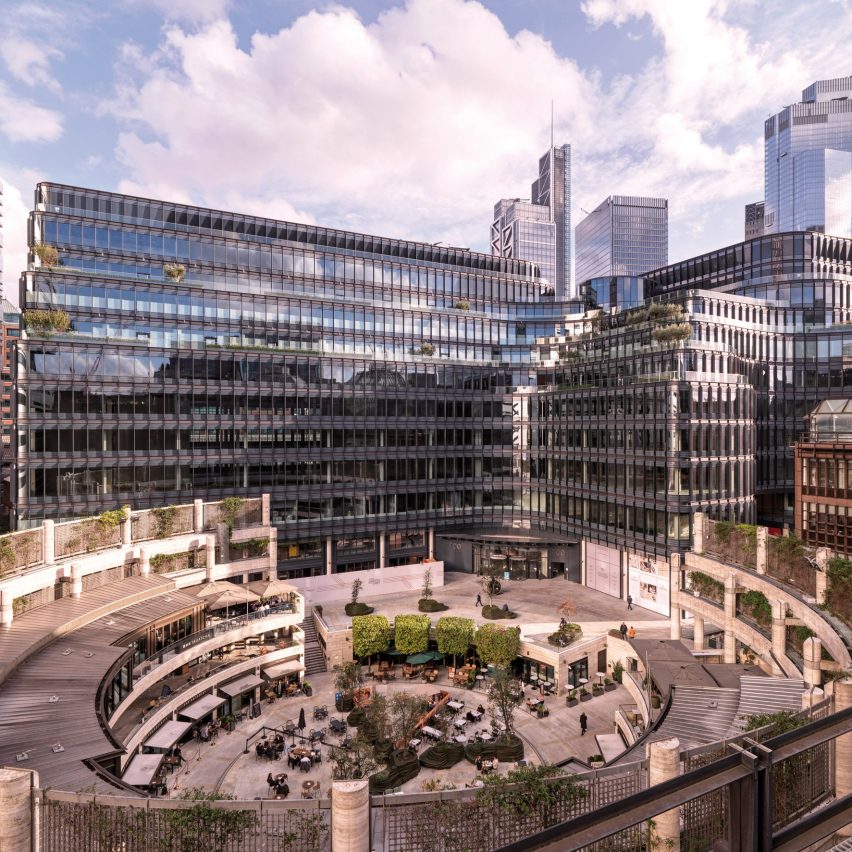 In a letter published on its website, Architects Climate Action Network (ACAN) criticised the Royal Institute of British Architects (RIBA) for shortlisting 100 Liverpool Street by Hopkins Architects and Orchard Gardens by Panter Hudspith Architects for this year’s award.

The group disputed the sustainability claims of the two buildings and urged RIBA to remove them from the shortlist.

“Labelling these projects as sustainable when they clearly aren’t is an attempt to pull the wool over our own eyes over the negative impacts that our industry continues to have on people and planet,” said ACAN.

“To the RIBA, we challenge you to reconsider this year’s Stirling Prize nominees,” it continued. “This list is not something to celebrate and promotes architecture that pollutes the planet.”

Built in central London, the 100 Liverpool Street office was designed by Hopkins Architects and qualifies as a net-zero carbon building, the practice claims.

Shortlisted building “an exercise in greenwashing”

The building was built on the site of a 1980s office designed by Arup Associates, which was stripped back to its structure.

Although Hopkins Architects reused this existing structure, ACAN believes that it would have been more sustainable not to tear down any part of the original building.

This would have conserved its embodied carbon and eliminated the need for new materials and construction with their associated emissions.

“100 Liverpool St is an exercise in greenwashing,” ACAN said.

“Demolition of the 1980s pink granite office block paved way for the erection of an entirely glazed office block,” the group continued.

“Its claim to net zero is founded on the reuse of a portion of the building’s original concrete and steel – hardly a saving for a building that did not need to be demolished in the first place.”

ACAN also criticised the decision to use carbon offsetting to reduce the building’s impact. Offsets are becoming increasingly controversial as they are hard to regulate and don’t always guarantee the removal of carbon from the atmosphere.

“The purchase of carbon offsets abroad in Tibet and Mexico is contentious,” said ACAN. “Buying offsets is a get-out-of-jail-free card that reinforces the status quo of pollution and takes land out of the control of indigenous groups.”

The group was also critical of the Orchard Gardens housing scheme in London’s Elephant and Castle, which also saw a building demolished before it was built.

“Unnecessary demolition further fuels climate breakdown,” the group continued. “The replacement of social housing with high-end homes is an act of social cleansing, which exacerbates growing inequality facing our societies.”

The six-strong Stirling Prize shortlist was announced earlier this month. Alongside 100 Liverpool Street and Orchard Gardens, it contained the Forth Valley College – Falkirk Campus by Reiach and Hall Architects, Hackney New Primary School and 333 Kingsland Road by Henley Halebrown, Sands End Arts and Community Centre by Mae Architects and The New Library at Magdalene College by Niall McLaughlin Architects.

These buildings were commissioned and designed to exemplary standards for their time. But the reality is that we’re not yet building sufficiently low-carbon schemes. We’re on a trajectory that’s dependent on a fundamental culture change within construction and tougher legislation. That’s why the RIBA 2030 Climate Challenge sets realistic, incremental targets to get us to where we need to be.

“This is a shortlist of our times”

RIBA president Simon Allford defended the decision to include both buildings on this year’s shortlist, but acknowledged that standards had changed since they were commissioned.

“These buildings were commissioned and designed to exemplary standards for their time,” he said. “But the reality is that we’re not yet building sufficiently low-carbon schemes.”

“There are many elements of these schemes that should be celebrated: when reuse is prioritised, when low-carbon materials are consciously specified despite heavier costs, and when one space has the capacity to serve multiple purposes to ensure long-term functionality,” he continued.

“Each year, the eligibility and judging criteria for the RIBA Awards becomes more closely aligned with the 2030 Climate Challenge targets. This is a shortlist of our times that demonstrates hope and ambition for a sustainable future.”

However, ACAN disagreed with this sentiment.

“Upholding projects like these as good examples grossly underestimates the level of change required from the industry to adequately tackle the climate crisis and neglects the needs of marginalised groups in pursuit of profit for a select few,” it said.