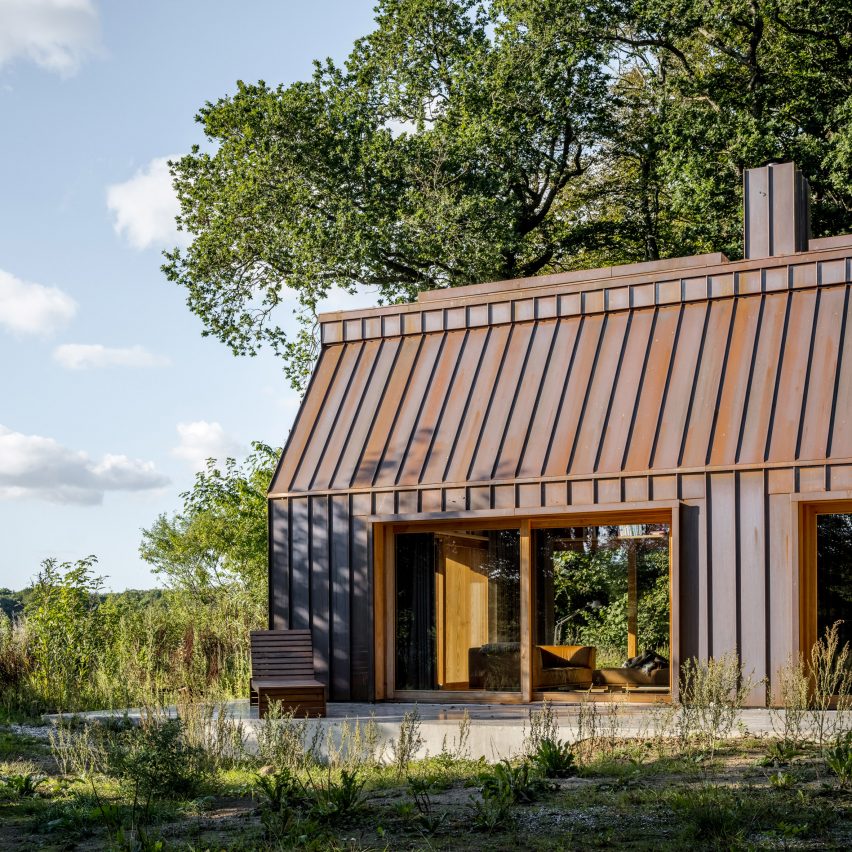 A lakeside forest on the outskirts of Aarhus, Denmark, is the setting for this copper-clad writer’s cabin designed by architecture and landscape office Sleth.

Sleth, a practice with offices in Copenhagen and Aarhus, designed The Author’s House to function as a full-time workspace for its client.

The building is designed to take advantage of its natural setting, with large sliding glass doors that frame views in all directions and allow the living space to extend outside.

“The area is so lush and beautiful that we wanted to really capture the essence of it, to try to create a seamless transition between the inside and outside,” explained Søren Leth, who is one of Sleth’s two founding partners.

“This was also very important for our client,” he told Dezeen, “as she works as much outside as inside, and is inspired by the landscape.”

Another building occupied the site before The Author’s House, so the cabin has been built over pre-existing foundations.

Planning regulations dictated that the building should follow the same rectangular footprint as its predecessor, which led Sleth to design a building with gabled profile and a simple layout.

The open-plan ground floor accommodates a large studio, which is divided into two spaces by a central hearth and chimney. A kitchenette is included in the space, while a separate bathroom and entrance lobby are located at one end. Meanwhile the loft can be used for storage or as a sleeping space.

“The house was made to meet the needs of the client, which was mainly as a place to work, think and be inspired, but there is also a loft with room to stay overnight for a couple of persons,” said Leth.

The materials palette was chosen to help the building blend with the landscape as much as possible.

The most distinctive of these is the reddish-brown copper skin, while will eventually oxidise to a green tone.

“On the plot there are large copper beech trees that match the colour of the copper facade,” said Leth.

“In time, as the copper oxidises towards a more green tone, the colours will match the other trees in the area, which are more traditional green.”

The floor is concrete, but is inset with stones to create a more natural aesthetic. This surface continues out onto the terrace, to allow indoor and outdoor spaces to feel as one.

“The texture of the aggregated concrete is meant to mimic the forest floor,” said Leth.

“When the doors are open, leaves from the trees and other outside elements are easily blown inside the house; this is all part of the charm and enhances the feeling of the forest floor inside the house.”

There is one element that stands out from the natural colour palette. Sleth chose a deep shade of blue – much like the shade used by artist Yves Klein – to allow the fireplace and bathroom walls to stand out.

Sleth typically works on large-scale urban projects, with previously completed buildings including the town hall for Tønder, in southern Denmark, and the three-storey Sonnesgade 11 office block in Aarhus.

While The Author’s House is quite a small project, Leth believes it epitomises two qualities that became highly important recently, following the impact of Covid-19 – it offers its owner separation between her home and work life, and an opportunity to feel close to nature.

“This house feels rather relevant in a post-pandemic situation,” he said.

“Of course not everyone has the possibility to build their own office getaway,” he added, “but a lot of people in Denmark enjoyed having to work from home during the pandemic, and surveys suggest they would like to continue having some days working from home going forward.

“You could imagine a future setup where this office getaway had more users, in a co-working and sharing economy kind of way, or even as an office hotel or a modern-day refuge, where you could stay for a period of time while writing a thesis or a novel, or making music or art.”

Photography is by Rasmus Hjortshøj, Coast.

The post The Author's House is a copper-clad cabin in a Danish forest appeared first on Dezeen.