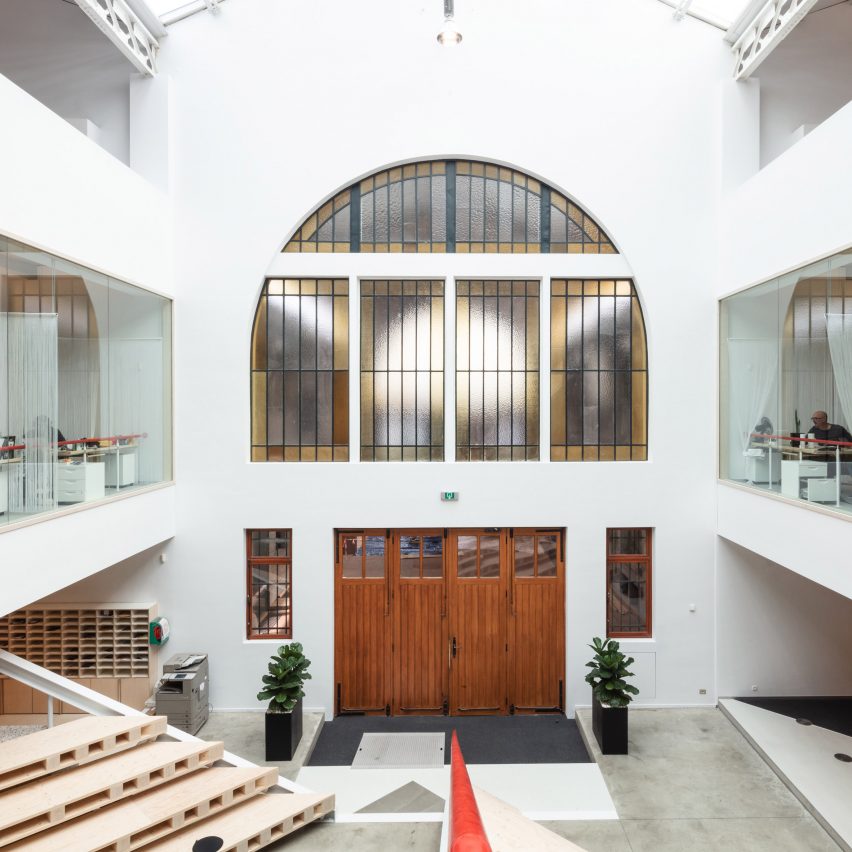 ZAmpone Architectuur has overhauled a 111-year-old industrial building in Brussels to create an office space for an advertising agency featuring triangular structures and soft barriers.

ZAmpone upgraded a building in Sint-Jans-Molbeek, a former industrial area of the Belgian city, for creative agency BBDO.

Built in 1908, it was originally used for storing and trading wine, but had undergone a number of renovations for reuse since. 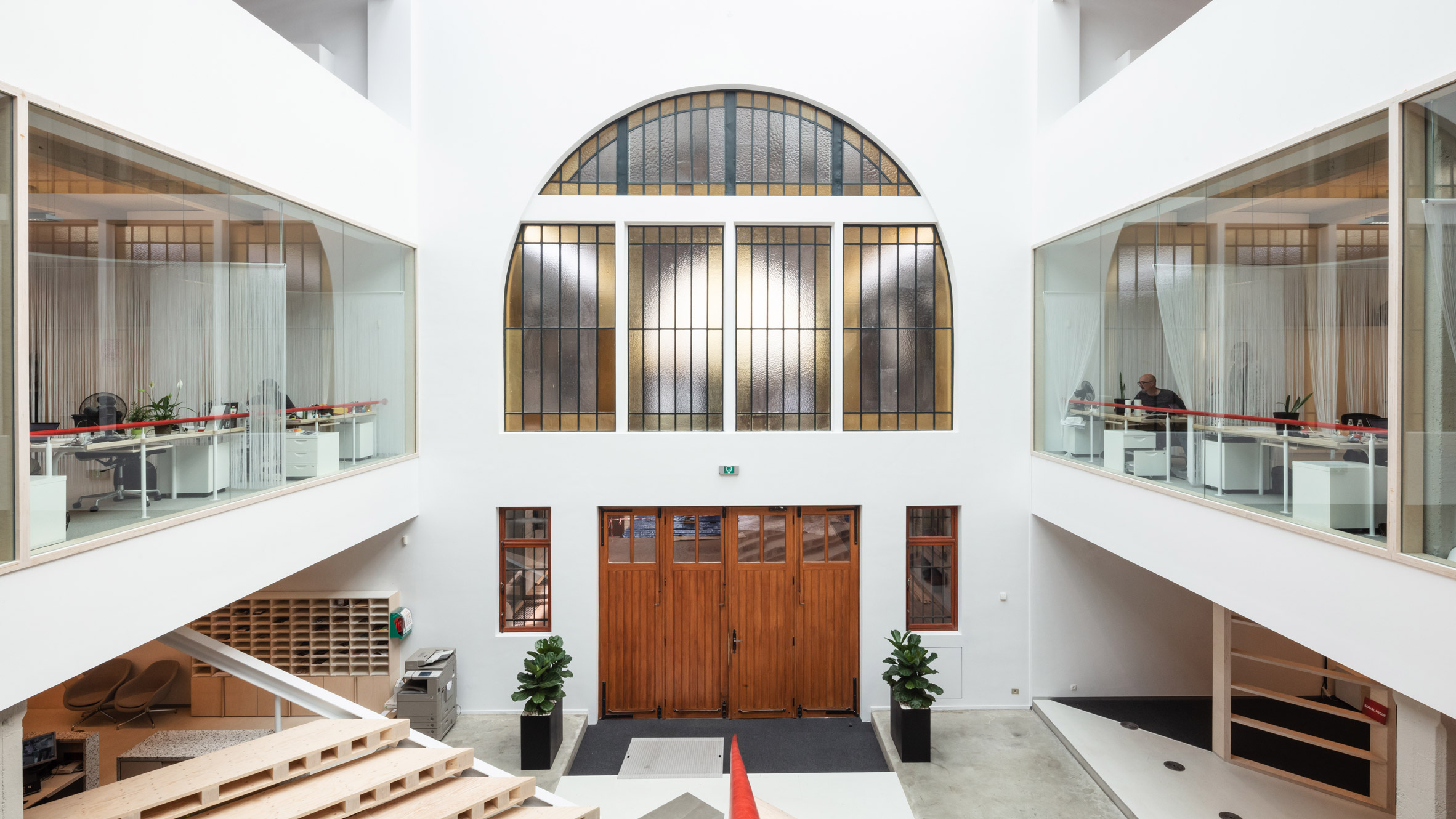 ZAmpone’s main objective was to update the building’s services and maximise the use of space for BBDO’s 200 staff. To achieve this, the architects created a floor plan that mixes open-plan desk arrangements with both private and informal meeting spaces.

To create a central communal space, the architects moved the main entrance of the building to the side, freeing up the triple-height former entrance hall. 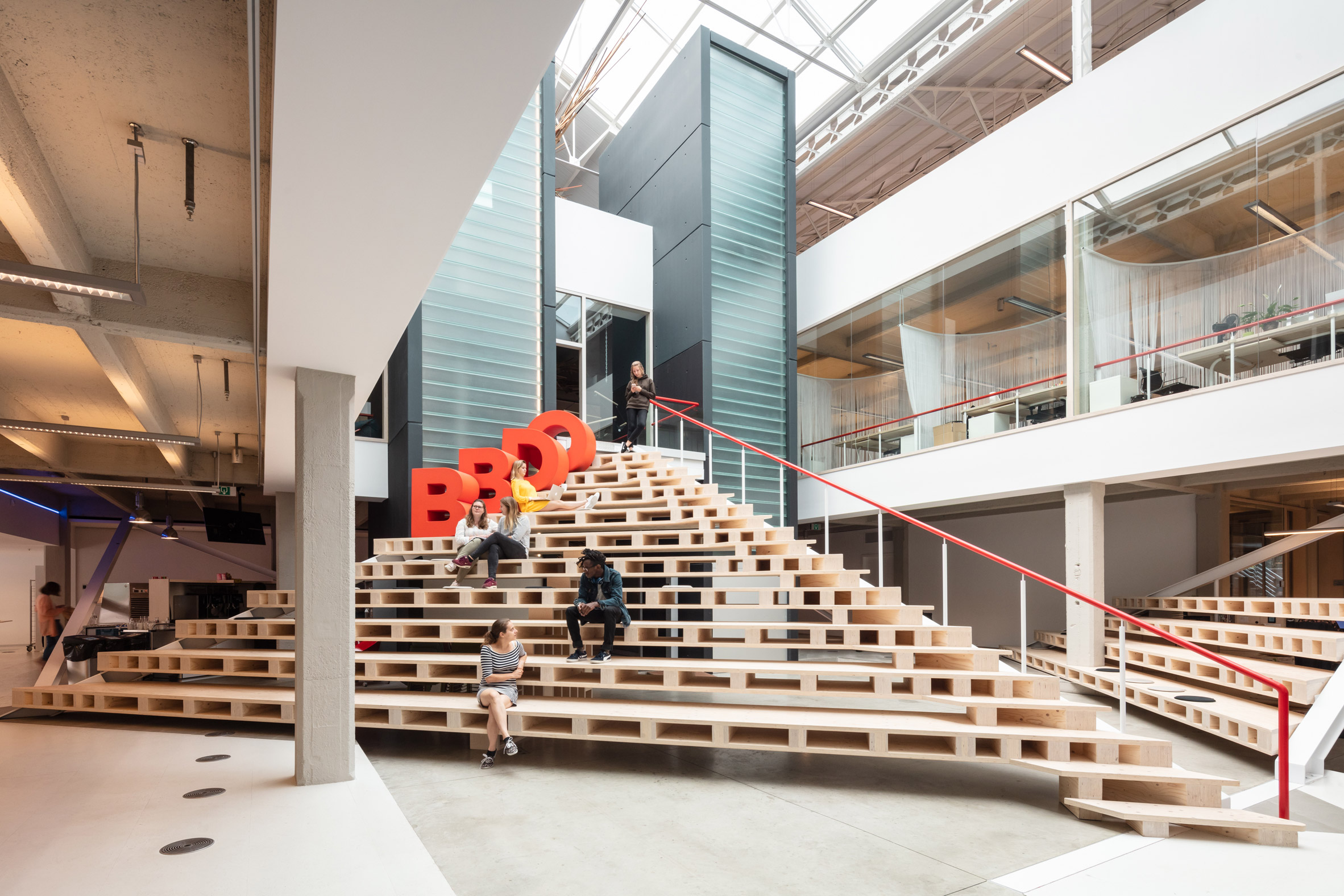 Workspaces overlooking the hall are fully glazed to allow light to penetrate through the building and to allow visitors and employees to see into the “heart” of the agency.

Soft barriers like textile fringe are used to define spaces without losing flexibility, while a series of white, triangular structures create definition in more public areas of the building, which are shared with other companies that now occupy the space created by the new design. 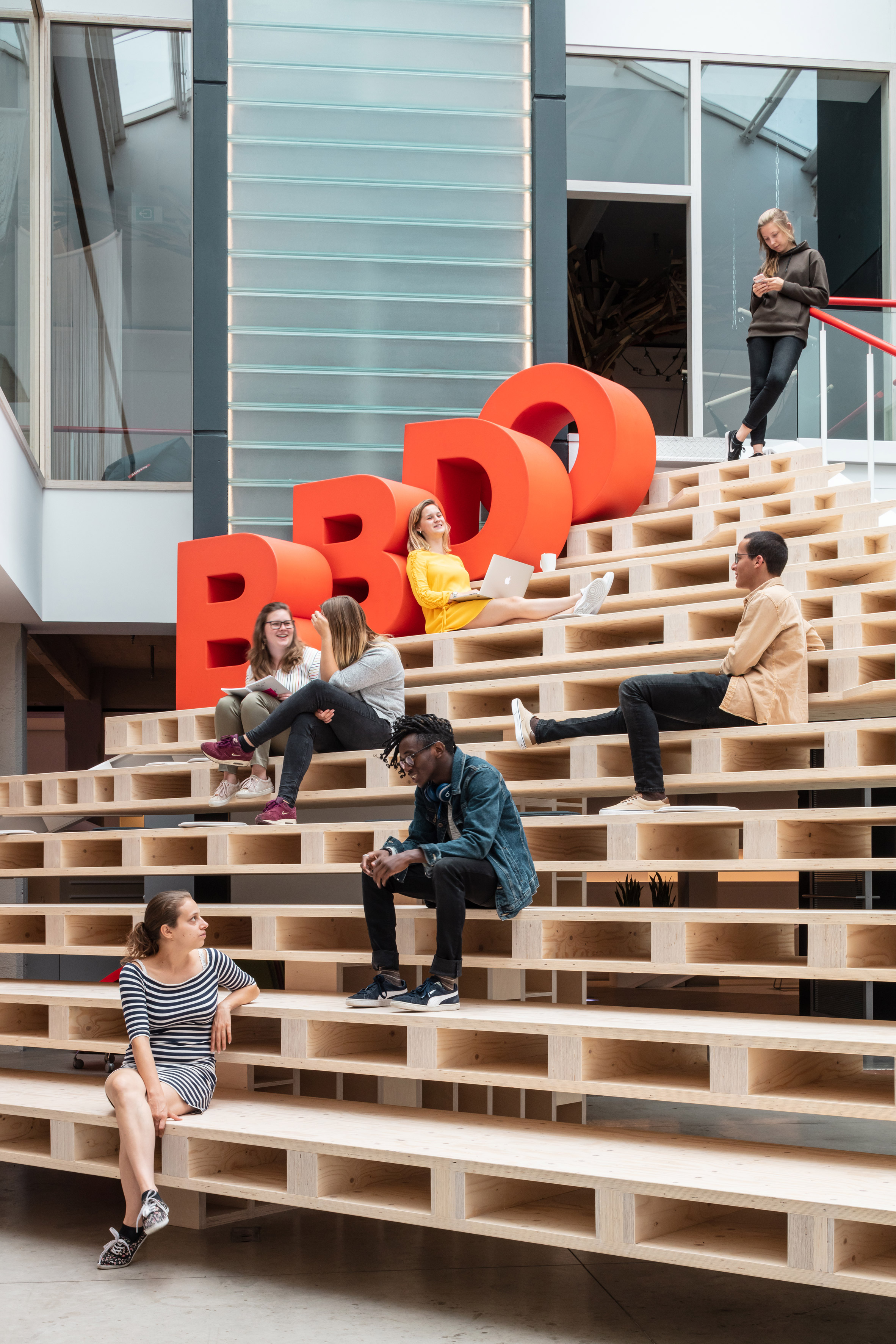 “We found a way to increase the surface for BBDO by introducing an ‘open space office’ – more people on less surface. The released space becomes available for other companies within the BBDO Group.” 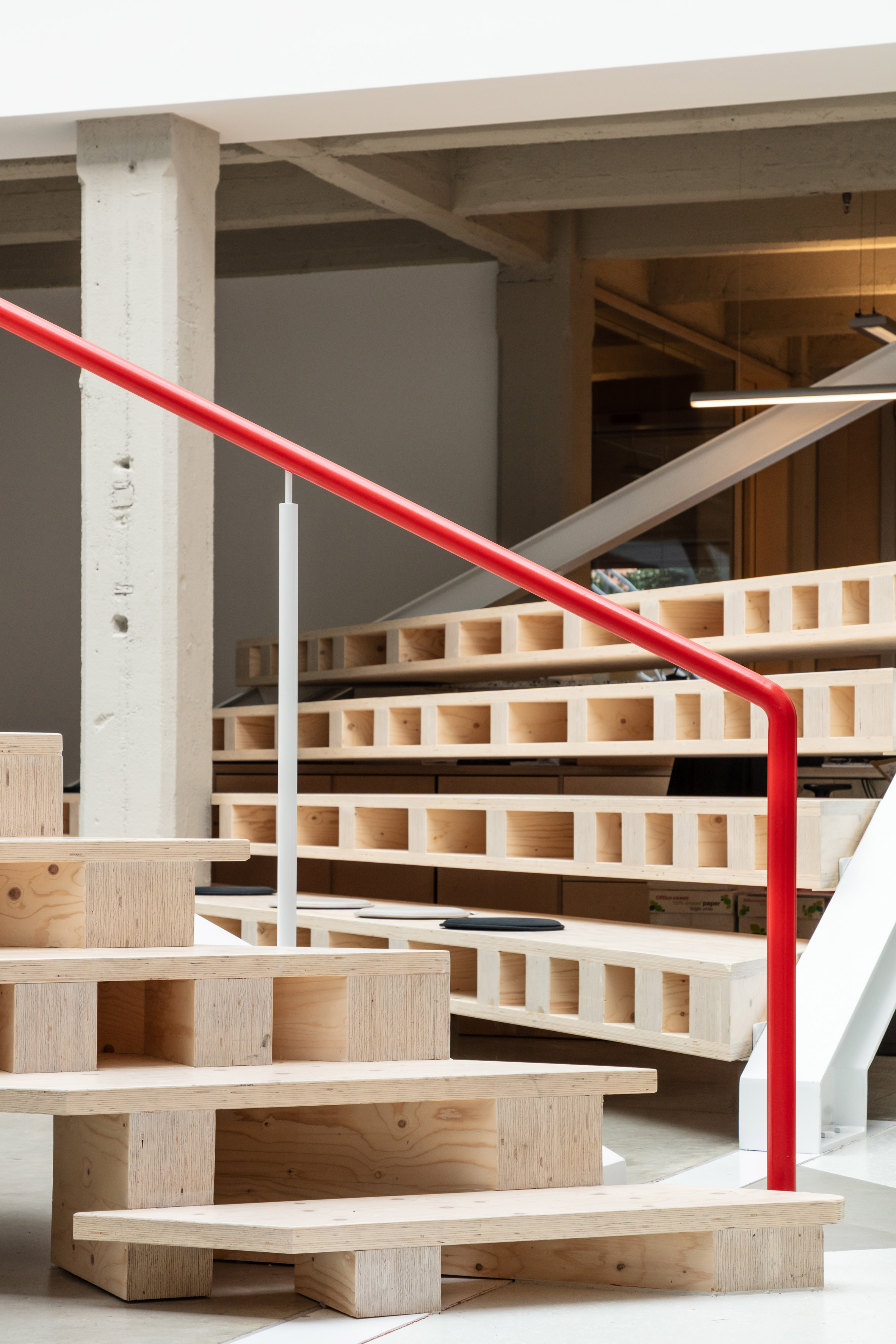 The ground floor hosts the communal spaces, including the reception area, shared meeting rooms, a cafeteria, sound editing suites, a kitchen and a large pyramid of bleacher-style seating, known as the “grand tribune”. This structure is used for company-wide meetings and presentations as well as more informal working.

The frame of the grand tribune is made from one of the four white-painted triangular steel structures, while the steps are made from wooden Kerto beams, with the widest spanning over 6.5 metres. 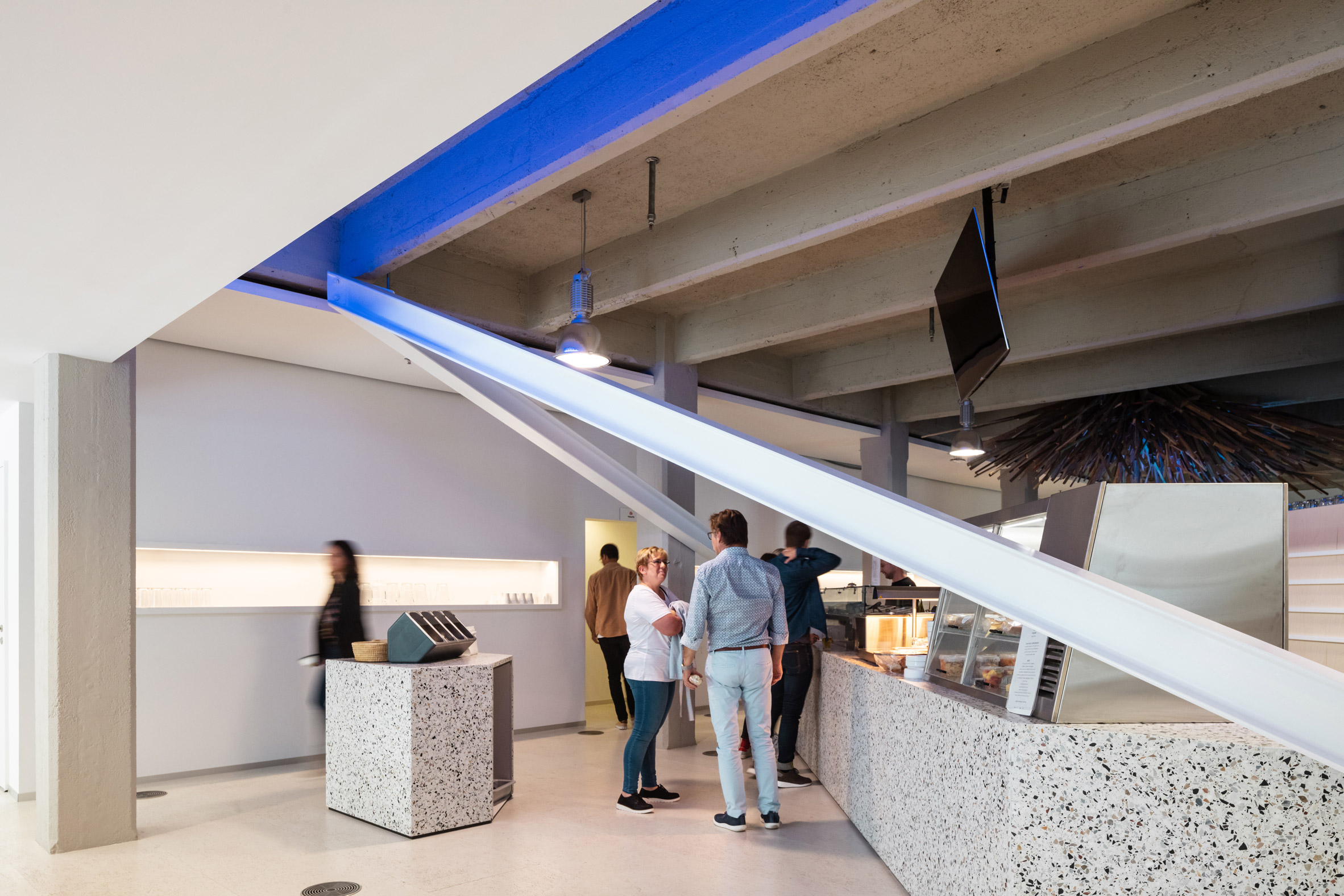 Another of the steel triangles is used to mark the reception area, which features a composite stone desk and a small bank of seating, while a third defines the restaurant space in the cafe area on the ground floor, which is used for informal meetings.

“By placing the steel beams diagonally we created accessible and non-accessible zones; if the beams are not high enough, on that spot you can’t pass by,” said Van Steenbergen. 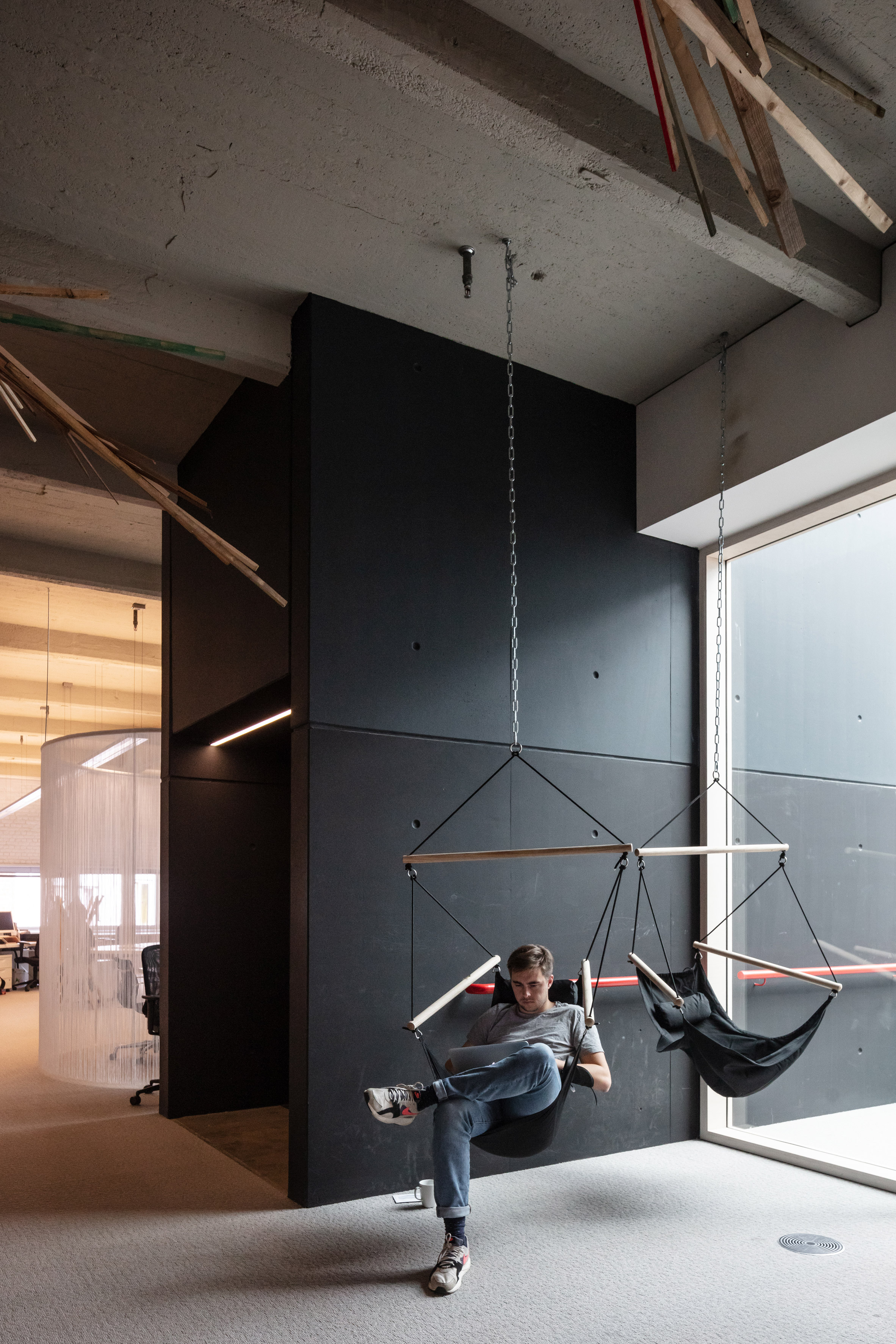 The back portion of the first and second floors is preserved for BBDO. Small meeting rooms are scattered around the edges of the open-plan workspace.

Most do not have windows in an attempt to limit the length of time spent in them. A fourth steel triangle is used to create a “break out” area of hammock-like seating. 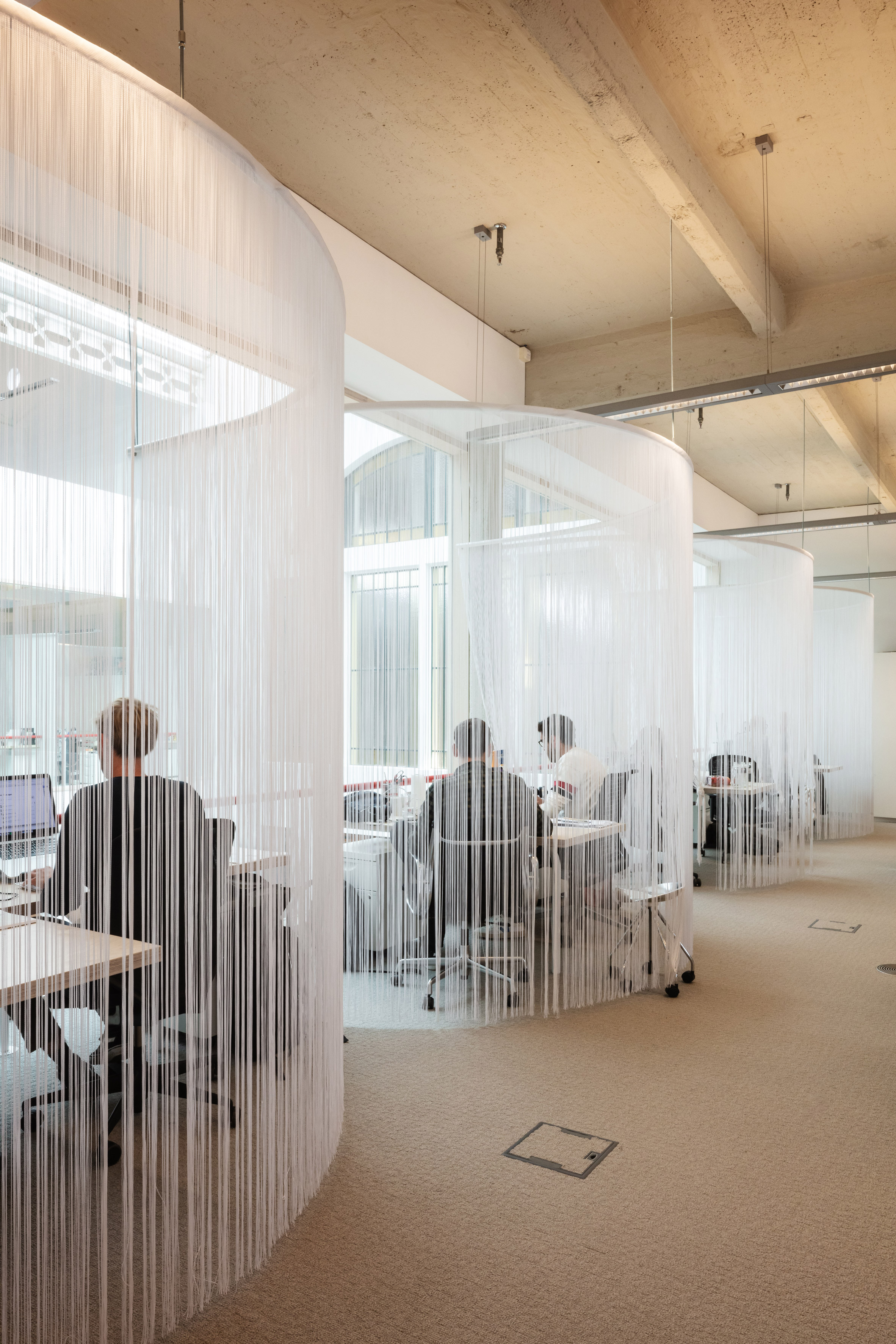 Cabling for computers and other electronics is housed in red steel-pipe modules, which can also be used to support acoustic panels, pendant lights, planters and curtains, allowing employees to personalise the space.

The modules can be easily moved, allowing BBDO to reconfigure the space in the future. 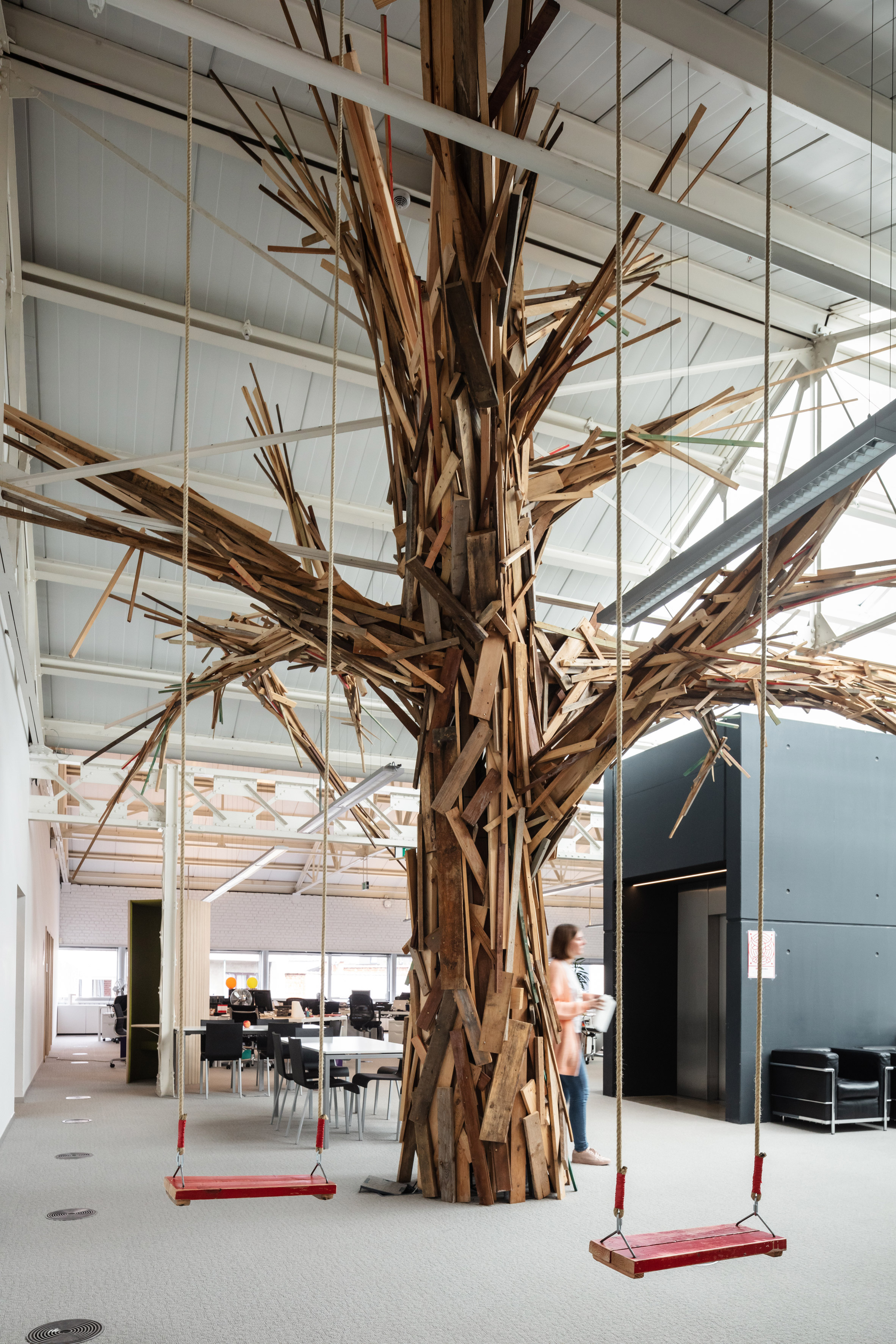 “We needed a solution to get cables to the right place,” explained Van Steenbergen. “We pull the cables through the tubes and connect as many tubes as necessary to get in the right place.”

“The red colour refers to the BBDO logo. In Dutch we say ‘the red thread’, in English we call it the ‘common thread’. This red thread runs through the whole building as a graphic performance.” 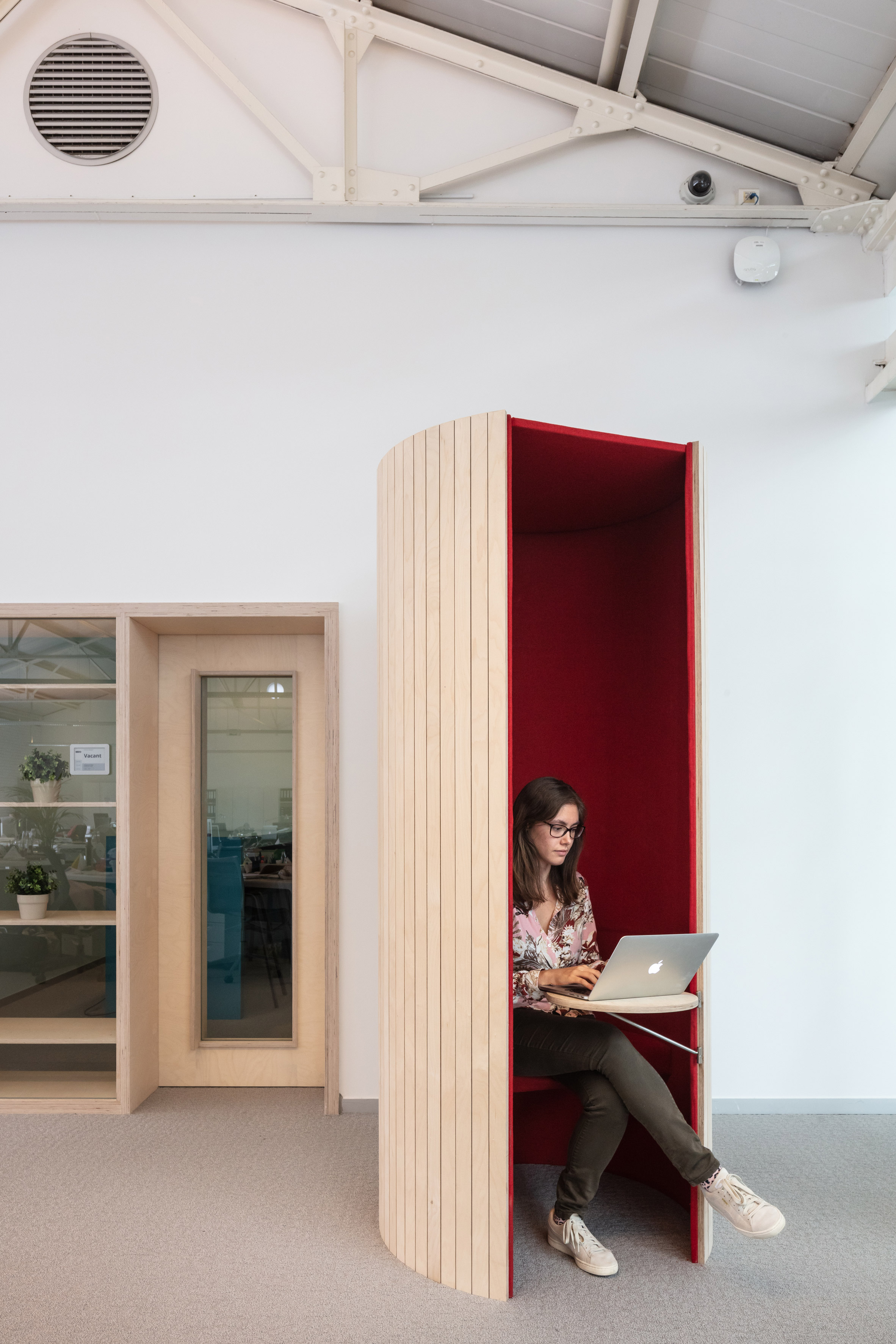 A growing number of former industrial spaces are finding new uses in Brussels.

The city’s old Citroen garage was recently the subject of an architectural competition to create a new branch of the Centre Pompidou. Other examples include a council office inside a former cigarette factory.